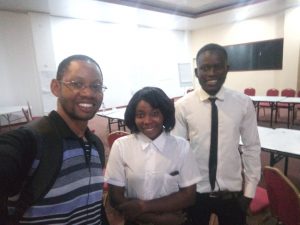 I like to think of myself as an inspiration to fellow young people, but I don’t think I’ve ever inspired anyone as much as this young man inspired me.

I met Balrington (who I thought was Darlington, until he texted me on WhatsApp) when I was overseeing community malaria surveillance training at Chingola’s Skyview Lodge, where he works part-time as a hotel attendant. During my 3 weeks of coordinating the workshop there, Balrington and his colleague, Catherine, waited on us with humility and courtesy.

So on the last night of the workshop, I decided to have a chat with them, to thank them for their service and get to know about their future plans. I got to learn that Balrington is actually a medical student at the Copperbelt University and only works at the lodge to earn a buck for upkeep. But that isn’t nearly as exciting as how he got into uni. This is his story.

At a time when finances were hard for him to raise so that he could pursue studies in medicine, Balrington left Chingola for Lusaka with two of his like-minded friends and nothing more than transport money to get to the capital city. Their mission? To have a sit-down with the minister of higher education and talk about getting bursaries. Oh, I forgot to mention that Balrington scored 8 points at Grade 12. Even with good grades, though, he somehow didn’t make the bursary recipients’ list.

So they arrived in Lusaka, held hands, said a prayer and walked over to the ministry of higher education. They wanted to see the minister, but of course, protocol wouldn’t allow them. They were told they could only make an appointment for the following day. But heck, these guys weren’t kidding around. To them, protocol was nothing more than an 8-letter locution in the Queen’s language and they stayed doggedly resolute. With no transport money to go and find lodging and then return the following day, they decided they weren’t going anywhere before having discourse with the honourable minister.

But they needed a plan. So they devised a plan: Placards. They wrote “WE WANT TO SEE THE MINISTER” on card board papers and stood near the ministry’s gate, holding up the placards in a way that the minister could see them from her office window. She knew something was up. She sent for them.

“All we would like is to have bursaries,” Team Balrington succinctly stated when they sat with the minister in her office. “We scored good grades, but were denied bursaries. How are we supposed to pay the K29,000.00 required for the course?” The three young men  also spoke on behalf of others who had been denied bursaries.

Today, Balrington has a 100% bursary and is enjoying his medical programme at CBU. Also, the many other deserving students that Balrington and his friends spoke for back on the Copperbelt got at least 50% bursaries.

Balrington’s story reminded me of a few things:

I salute Balrington and Catherine and pray that they have great success in their careers. Their determination and work ethic touched my heart.